Yoon and Verbal of Ambush Design

Yoon along with her husband Verbal are the creators of the Japanese accessories label 'Ambush Design'.
Yoon is a creative director, graphic designer, DJ and blogger. Verbal is the lead MC for hip-hop groups M-flo and Teriyaki Boyz, producer and soon he'll begin his own TV show. Damn, talk about work experience!
Ultimately, they're international premier style icons.

In 2004 they created their 1st high end jewellery line called Antonio Murphy & Astro. Their 2nd line 'Ambush' was launched in 2008. The signature 'POW!' piece is what made AMBUSH take flight! 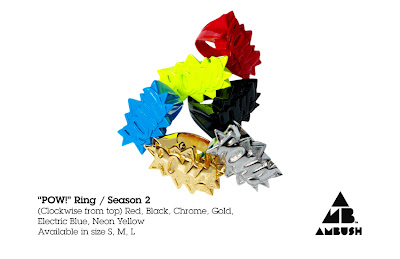 Hard work is what gets you to where you desire. Illustrated perfectly by Yoon and Verbal. It's clear how much work they've put into this brand and it's demonstrated by their independence. Self styled, producer, no contracts, no schedule, they run everything when they want and how they want it.

They're inspired by everything, from the architecture in Paris to the books they read before they go to sleep. What i love about them is how open they are to their surroundings. Many designers are stuck in their high-end couture bubble and repeatedly create collections which blend in with other designers. I like to see a bit of rebellious risks taken in fashion. Bold prints, colours, elaborated structures. Which is why underground designers appeal to me more, as they please themselves before attempting to please the eyes of the consumers.

Their accessories stand out from the market, standing alone on a throne of perfection. They make what they like and succesfully the majority of people do too.

Prepare yourself for the awesomeness Their outfits are seriously next level! Definetly fashion forward.
I love how Yoon is able to wear a T shirt and full on couture and make it all look so effortless~


Although, they are well known for their style. This isn't the only reason why i admire them so much. Their passion for what they love is what has taken them so far, including the hard work they have had to put in as they started from scratch to create what they love. Their openness to other cultures, surroundings and everything that evolves is what aids them in their journey to the top.

"If you're not into those stuff, people just think you're crazy you know. But, that's the kind of stuff that exites us." Randapow
London, United Kingdom
The name's Randa. A student born and raised in London. Informing all you rebellious young fashion lovers with upcoming designers/trends/street styles and events weaving in and out of my life. Enjoy ~✭